There has been so much talk this year about our city council races. In part because there were A LOT of candidates running in the primary and there are important issues going on in this city that our local media has been talking a lot about. However, there a several EVEN more overlooked local offices that are *dare we say* just as important that the City Council elections. 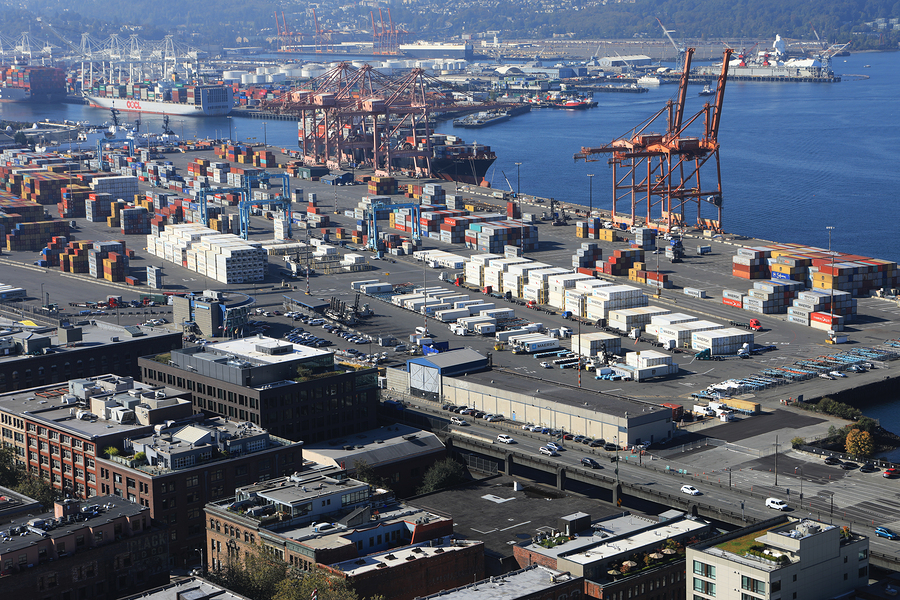 Ahoy matey! Have you ever flown on a plane in Seattle? Have you ever been on a boat in Seattle? If yes – we are 100% certain you’ve interacted with the Port of Seattle. You might have even heard the Port Commissioners whispering sweet nothings to you over the intercom at SeaTac Airport while you are waiting at the baggage claim saying “WELCOME TO SEATTLE”. They are really really glad you are here and so are we!

The Port of Seattle oversees our SEA-port and our AIR-port. While the Port of Seattle’s budget is smaller than many of our other local governments (about $650 million a year) the five person commission (who work part time) do a considerable amount of work overseeing one of the central economic engines of our region and state.

The SEA-port located on our waterfront and our AIR-port located in SeaTac transport tourists, business travelers, and cargo like fish, apples, iPhones from around the world and so much more. Over 200,000 people are employed through the Port’s operations (only about 1,800 people are employed directly by the Port of Seattle) – from flying airplanes, operating security, to unloading and loading the cargo barges and cruise ships that come in and out of Elliot Bay.

If you care about the environment, the Port of Seattle is a good place to keep your eye on as transportation is the largest emitter of fossil fuels in Washington State and the Port of Seattle Commissioners are continually working to address this important issue.

Five Port Commissioners are elected at-large across King County, this year we are voting on two seats. Port Commissioners are part-time positions that oversee the Port’s Executive Director, establish policy and big picture direction, and support with inter-governmental relations and partnerships. Terms are 4 years.

The King County Council literally deals with your sh**. King County is our local government that oversees *you guessed it* King County! King County has a nearly $12 billion biennium budget that runs our Metro Buses, our jails and criminal justice system, administers many of our direct services to our homeless neighbors, our public health programs like restaurant health inspections, and yes our waste water treatment plants. That’s also just the tip of the iceberg.

If you like our buses, care about ending homelessness, and don’t want poop getting into the Puget Sound — the King County Council elections are a good thing to learn about!

King County is home to over 2 million people, and is the largest metropolitan county in Washington by population, number of cities, and employment. It is the 13th most populous County in the US.

King County Executive Dow Constantine (who is not up for re-election this year) manages King County government’s nearly 15,000 employees. The County Council is the legislative branch whose job is to create policy, appropriate the County’s budget, and provide oversight over the functions of the County. King County is divided up in 9 Council Districts — 4 of which include the City of Seattle and members are elected to 4 year terms.

This year we are voting in four County Council races – three of which touch Seattle and one that includes Bellevue, Mercer Island, and other parts of East King County. These races are definitely worthy of some attention. 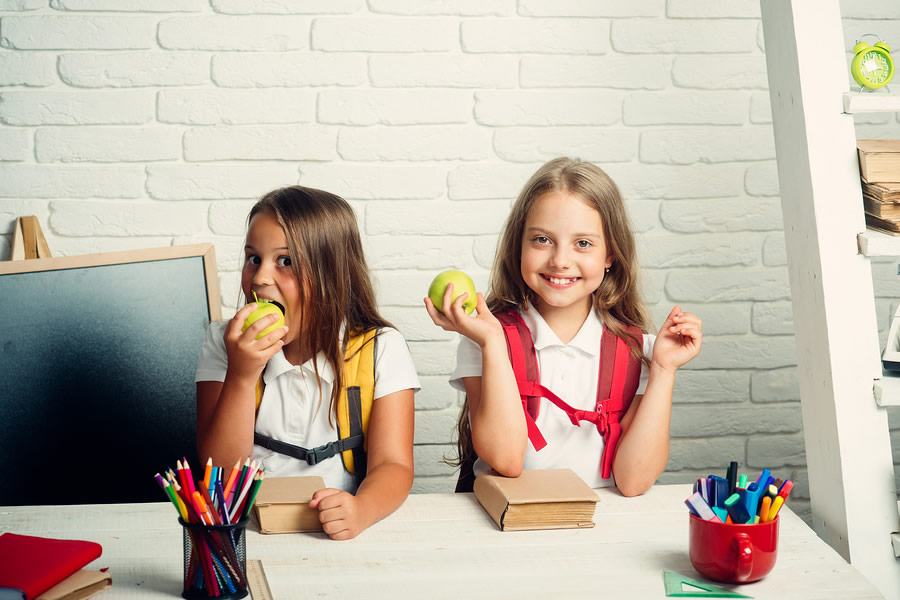 Sharpen those pencils… (and maybe grab a drink) because we all have a lot to learn about one of the important — and under appreciated — local elected offices: the Seattle Public Schools School Board!

While the Seattle School Board is not the most glamorous job in the world, School Board members do really important work. They oversee over a billion of investments in our local public schools and shape the policy that cultivate young minds BUT being on the School Board is a pretty thankless job. The members don’t really get paid (they are eligible for reimbursements for some expenses), their meetings are often hours of testimony from parents, educators, and students where there is often no way to win, AND the majority of the funding for our schools comes from the state which means large portions of the district’s budget are subjected to the politics of our state legislature*.

Seattle Public Schools is the largest K-12 school system in Washington State and has an annual budget of over $1 billion. There are nearly 53,000 students from kindergarten to 12th grade enrolled in one of Seattle’s 102 public schools. The vast size of the school district is a lot to support on its own but Seattle Public Schools has students who speak over 140 languages, 31% of the students receive free or reduced lunch, and a devastating 4,280 students experienced homelessness in 2017.

Seattle Public Schools is overseen by a 7 person School Board that are elected by district in the primary and then elected at-large at the general election. You may not have voted for any school board candidates in your district at the primary – but you will be voting in 3 races in November.

*Seattle School Board Members oversee a budget that’s subjected to the politics of our state legislature. Seattle Public Schools receives ~65% of its budget from the state (mostly from property taxes and sales taxes) and the majority of the remainder comes from local levy funding. School Districts and communities that are more affluent have a larger tax base to fund schools through levies which creates inequities across our state in how our kids are educated.

There have been several efforts to address these structural funding challenges in the last decade through a high profile State Supreme Court decision, known as McCleary. As a result the legislature has increased its overall investment in our public schools and capped how much school districts can collect from local levies. That all sounds good but the additional state funding was not enough for Seattle Public Schools to fully fund educational programming for counselors, nurses, special education, support staff, and more.

The School Board placed a levy on the ballot last February to address these funding gaps and voters approved the measure with nearly 70%. The only hitch? The levy approved was above the levy cap set by the legislature, which is a somewhat common practice across districts. Fortunately for Seattle Public Schools, the legislature lifted the cap on local levy funding in the final hours of the legislative session last April. Following addition budget cuts, the School District’s budget is now good to go BUT it may mean that the rigamarole of lawsuits and legislative chaos around fully and equitably funding education will continue for the foreseeable future.

You still there? Congrats! You made it. Our education funding is complex and another reason why being a Seattle School Board member is important AND challenging. 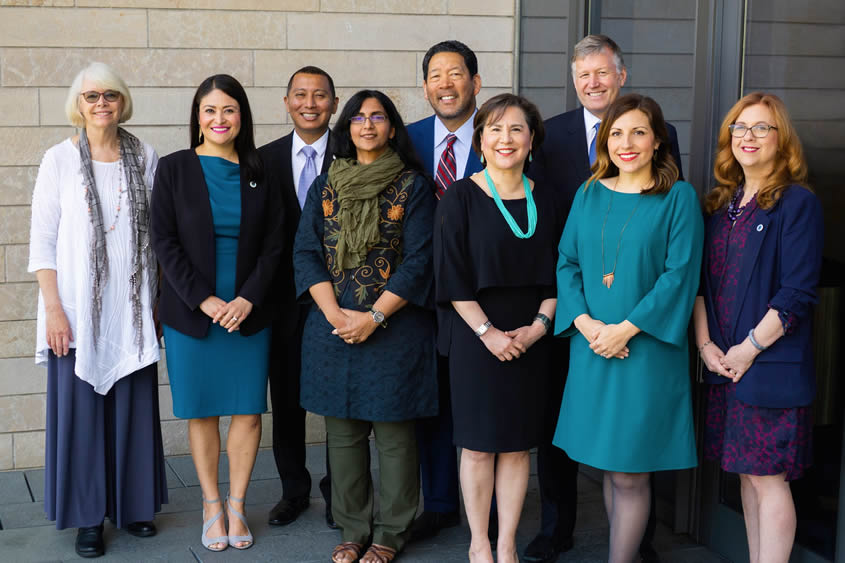 The City Council oversees over 11,000 employees and a $5.9 billion budget. While that seems like a lot of money (and it is) about 75% of that budget is “rate payer money” which means the money collected must be spent for the purpose rates were collected. Rate payer funds are all the important things we take for granted until something goes wrong: electricity, tap water, drainage, stormwater, garbage, recycling, compost, and more.

Not only do these programs need strong oversight to ensure we don’t have to think about them but they are also a place where transformational policy happens. For example, Seattle City Light (where your power comes from) sold its share of coal-fired power and increased its investments in renewable energy and energy-efficiency programs in 2000 and became the first electric utility to reach netzero carbon emissions in 2005.

Our drinking water in Seattle comes from the Cedar River and Tolt River Watersheds and is one of the few unfiltered water sources in the country. Why unfiltered? Because the City of Seattle owns 99.6% of the land that feeds the reservoir and controls what goes on the land at the source of the water. If you’ve ever hiked Rattlesnake Lake — that’s the only public access to the land that protects our water — you can view the lake where most of our water comes from at the summit. The water tastes pretty great as a result.

The “non-rate payer money” that the City Council oversees funds our street paving, sidewalk, pedestrian and bike infrastructure, bridge maintenance, runs our street car system, and purchases additional bus service from King County Metro. It funds our fire department, police departments, and helps prepare us for emergencies. It funds the management and maintenance our nearly 300 parks and open spaces, community centers, pools, senior centers, and invests in community college for Seattle’s high school graduates and runs a universal pre-K pilot program for our 3 and 4 year olds.

The list could go on. The policies and priorities listed above reflect the priorities of the City Council and Mayors past and present. The decisions our elected leaders make certainly affect us right now but they are also making decisions that will shape our city and region for the next century — it was the Seattle City Council over 100 years ago that made the decision to establish our watershed.*

What also makes this election cycle exciting is that for the first time many City Council Candidates are participating in the new Democracy Voucher program — a public financing of elections. (Learn more about Democracy Vouchers). You can research the candidates and if you like a candidate and they are eligible you can send them your democracy vouchers!

TAKE THE PLEDGE TO VOTE! 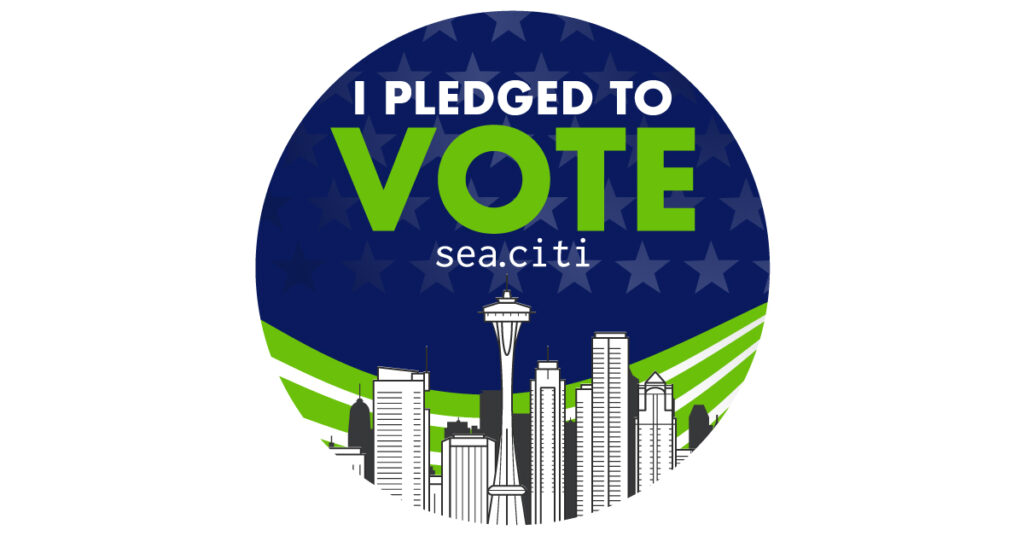